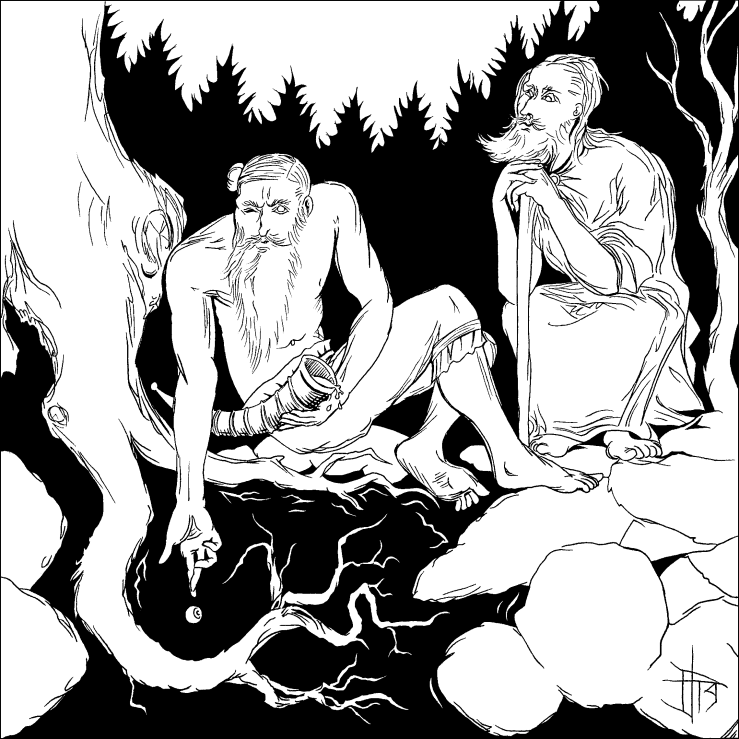 A major problem for our knowledge on continental Germanic Paganism is the lack of written sources. There are however instances where we find evidence that cult and mythology were very similar to the one in Scandinavia, which we know more about due to the preserved Old Norse Eddas.

For example, the Old High German ‘Muspilli’ is an early medieval Christian text about the end of the world, but the similarity of its name to the Norse Pagan Muspelheimr indicates that similar concepts existed in both regions of the greater Germania. Let us look into more examples that show similarities between north and south, since it has often been claimed by scholars that assuming a common Germanic belief is not supported by evidence. It is no wonder that scholars who ascribe no deeper truth to mythology and Pagan beliefs see it all as a random collection of abstract concepts, which may thus easily differ throughout the Germanic area. If beliefs however have a firm rooting in realities and the natural order, this connection should be able to maintain their meaning and make them anything else but random.

The central element of Norse Mythology is a giant ash tree called Yggdrasil, which spreads its evergreen branches over the whole world. At its three roots there are three wells and three realms. In the Eddaic Fjölsvinnsmál we hear about the Worldtree:

Mimameidir it is called,
but few men know from what roots it springs:
it by that will fall which fewest know.
Neither fire nor iron will harm it.

Compare this to a folk song that was still sung at the Hollenloch („cave of Holle“) in 19th century Hesse:

Miameide – stands on the meadow
– wearing a green skirt.
Three young maidens sit there.
One looks ahead,
the other into the wind.
The woman at the well
has many, many children.

As this translation of the song shows, the similarity between Old Norse Mímameiðr and German Miameide is obvious. The three maidens remind us of the three Norns, one of them looking ahead (into the future), the other into the wind (past). The well matches the Norse Urðarbrunnr.

Now lets go into detail in regards to the cave that the above folk song is related to, the Hollenloch, cave of Holle.

Frau Holle is the name of not only a fairytale character, but also a mythical figure of folk belief in the central German area. In medieval manuscripts her name is mostly Holda and the oldest sources that mention her go back to the 13th century. The etymology of her name most likely goes back to a root meaning „benevolent“ or „gracious“. In southern Germany she is called Perchta or Frau Percht, in northern Germany we find her as Herke, Freke, or Frick.

One of Holda’s primary roles in the tales is that she leads the Wild Hunt during Yule, either together with Wode/Wotan or in his stead. It seems she is often also called Frau Wode (Lady Wode), as Herr Wode’s wife would fittingly be called. Her attributes are the elder plant (which is in German called Holunder, Holder or Holler) and the distaff or spindle. She teaches female handcrafts like spinning and weaving to girls and blesses them with fertility. Like in the fairytale of Frau Holle, she brings the snow by shaking out white bedsheets at her window. And she is sometimes also said to bring back the growth of the greens in spring. As we know, the snow works as a protective layer for plants in winter.

Another location tied to her is the so-called Frau-Holle-Teich („pond of Holle“, also in Hesse), which is said to increase female fertility from bathing in it. It is seen as a gate to the Otherworld: Holle is also seen as the bringer of children, and she takes the souls of children with her who have died too early.

It has been shown that Holle is a an original Pagan deity that in times of Christianisation was transformed into a figure of folk belief. As her northern German name Frick suggests, she probably goes back to the same deity as the Norse Frigg. Frigg does not participate in the Scandinavian Odensjakt, but she is Óðins wife and her attribute is also a distaff. Her role is that of the mature housemother, as opposed to the virginal Goddess Freyja. And finally, an epithet for Frigg is actually Hulla, meaning benevolent or gracious, just like the name Holda or Holle.

Now we can try to put these different pieces together: Frau Holle is most likely the same as the Norse Frigg, is a Mother Goddess and guardian of the Otherworld, the realm where the dead go to, but also the place where newborn children come from.

Our folk song describes Miameide as a woman, by saying she wears a skirt, but also implies that it’s talking about a tree, since the skirt is green, and it stands on the meadow, just like a tree. Seemingly seperate from this, it talks about three maidens that sit underneath the tree. And then in the last two lines it mentions a woman at a well, who has many, many children, which must be said Miameide, or the Norn in the middle (present, Verðandi) – or maybe both? Time is of course an important nexus for natural cycles of death and rebirth, so the three Norns, Past, Presence and Future, seem to be aspects of a maternal entirety. They spin and weave our fate in the primal depths of the Underworld, where the roots of the Worldtree reach into the water of an eternal well, bringing fertility and life to the world. Since this is about reincarnation of ancestral souls, the Worldtree and burial mound may be seen as a spiritual analogy to the female womb, as has been pointed out by others before. The Eddaic text too says that the Worldtree has nine branches, like the nine months of pregnancy, and that it is not a normal tree by saying that neither fire nor iron can harm it. By this, the text makes clear that it talks not about a material object, but about an abstract symbol, the principle of giving birth to new life again and again.

After Sigurd slays the dragon Fafnir in the Eddaic ‘Fáfnismál’, he asks him which are the Norns who help in need and „from babes loose the mothers“. Accordingly does the Fjölsvinnsmál say that the fruit of the Worldtree helps women that are ill with fever by driving out „what sits inside“, a kenning for the physically and mentally strenuous act of giving birth.

We can thus say that the concept of the Worldtree was important to both Norse and continental Germanic Pagans. We can also extrapolate that both of them knew of the Norns, the figure Mimir/Mime, and perhaps also the tale of Óðinn/Wotan visiting the Worldtree to gain wisdom from Mimir’s well.

There was certainly also a version of the Norns on the continent, as the equivalents of other Indo-Germanic cultures and the mention of the three maidens in the folk song from the Hollenloch heavily suggest. The word Norn is explained as going back to Proto-Germanic *gnurnōną, which means „to mourn“ or „to knot“, and the name can in Iceland also mean „witch“.

Maybe the original Norns were spiritually learned women, who guarded the graves of people who had died. If we can follow the interpretation of the Old Saxon word sisas as „songs“, then maybe they sang the dadsisas, songs for the dead, that the ‘Indiculus superstitionem et paganiorum’ mentions. This might be the case or not, the ancestor’s rebirth must have been facilitated by cultivating the memory and maintaining a spiritual connection to the dead person. The fabric of the soul could thus be woven and knittet again for a new birth. Later the midwives entrusted with this task would fittingly be seen as witches by the Christians.

The figure of Mimir appears on the continent as Mime, who is in the ‘Þiðreks saga’ a smith that teaches his craft to the heroes Siegfried and Wayland. The Þiðreks saga is accepted as being an Old Norse version of heroic songs that are originally from the continental Germanic area.

The Middle High German epic poem ‘Biterolf und Dietleib’ from 13th century Austria mentions a forgemaster called Mime and his apprentice, who bears a sword called Mimminc. In the 12th century, Danish historian Saxo Grammaticus talks about a forest spirit called Mimingus, who has in his possession a sword, a ring and other marvelous jewelry. Later on, Richard Wagner would adapt the mythical figure for his ‘Ring des Nibelungen’.

Mime has a rather dwarfish nature, and weapons were typical grave goods for the dead. If inherited from an ancestor, they would hold in them the honour and blessing of the whole sib. If we look at the Norse giant Mimir, who guards his well, Mímisbrunnr, we don’t find anything related to blacksmithing. The common denominator is apparently his role as a teacher and conunselor, as Óðinn finds wisdom in his well and asks Mimir for his advice even after his decapitation, so that Óðinn will carry around his severed head, which is – even though it should be dead – still talking and giving counsel.

This role is also reflected in the etymology of Mimir’s name, which is explained as either “the one who ponders”, or “the one who remembers”, in the latter case being related to Old English verb mimorian. Óðinn gives one of his eyes to the well of reminiscence, so that in return he can obtain the lost ancestral knowledge of a previous life.

Etymology of the word Norn: https://en.wiktionary.org/wiki/norn